Wednesday Nov 3 will be the day Iraq starts to turn around, because whether he wins or loses the election on that day Bush will be a lame duck president and he can allow the military to get down to business. Bush will finally have no reason to flip flop on Iraq. Attack Faluja, stop the attack because of some bad press saying our marines are killing women and children. On Nov 3 the tanks will roll, and the insurgents will get their asses kicked.

Birth of a Nation : A Comic Novel 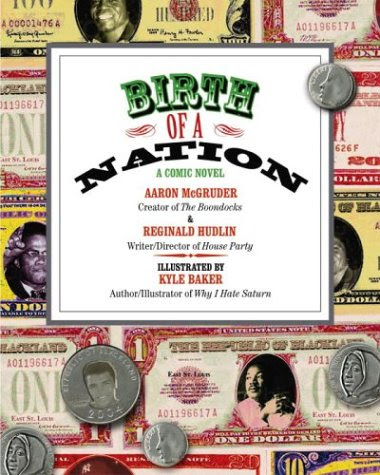 Birth of a Nation : A Comic Novel
by Aaron Mcgruder, Reginald Hudlin, Kyle Baker An excellent, excellent book a must read. These three have nailed it all from inner city life, to international politics.

"But when a long train of abuses and usurpations, pursuing invariably the same Object evinces a design to reduce them under absolute Despotism, it is their right, it is their duty, to throw off such Government, and to provide new Guards for their future security." - full text

Need I say more. Buy read it, save it. And read it again.

Low intensity racism is real and you have two choices, adapt to it and live your life or waste your time hoping that everyone will become more sensitive. Vision circle pointed to this Gallup poll that discuses it.

Retail shopping is the setting in which the highest number of blacks perceive discrimination within the last 30 days. Young black males are particularly likely to say they have felt discrimination while shopping, and in terms of contact with the police.

As a black man who shops I have run into this problem a lot, to me the biggest problem is the security guards who cause the static are usually black too and I don't want to cause these low paid hard working people extra static in their life either . Since I want as little static in my life as possible I usually acknowledge the store security if I am coming into the store with something I might buy there, I will usually stop by the guard and show him/her I am coming into the store with it. So if I walking into Barnes and noble with a $25 hardback in my hand I catch the guards eye so he can see that its mine. I think it saves me from getting static and him from having to cause it.

Personally I don't mind if they check my bag and want to make sure I didn't shoplift. I just wish they would stop an equal number of white men and women too so everyone was equally inconvenienced.

Why I love the web: IM Fight (quicktime movie)